The film captures the lives of Sardinian miners battling for their rights, as they are being threatened to lose their job. Exploring the netherworldly existence of workers that are almost forgotten by the media and general public alike, director Valentina Pedicini manages to conjure an atonal, disturbing beauty in painstakingly crafted pictures that celebrate the resilience of human beings.

There are stories in which numbers are not merely statistical evaluations but mirror (or hide…) the existence of endangered lives. Therefore a director’s task becomes to show exactly those lives behind the cold data that is fed to the public media and immediately forgotten as soon as a more appealing drama appears. Over a lifetime, a miner spends on average 57,600 hours working at 500 meters beneath sea level. To organize those numbers in a filmic narrative, director Valentina Pedicini took more than two years only to gain access and confidence from the miners. She and her crew basically lived with the workers in the shaft spending almost a month without seeing the sunlight. There is silence. A lot. And the editing is carefully paced. There’s only one voice: a woman’s voice. A voice that tries to rise from the deep to bring back the images of those who have been forgotten while lingering in the dark. Valentina Pedicini crafts a stark political film that captures some of the most eloquent beauty of men and women fighting to regain their rights as workers and human beings. 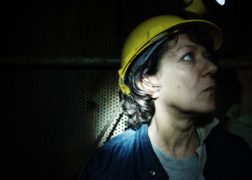 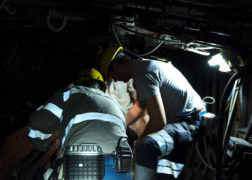