Ten years after leaving, Karim Loualiche, a physicist, poet and musician, returns to his homeland of Kabylia and wanders through the landscapes of contemporary Algeria. This filmed journey melds documentary with fiction to evoke lost bonds to an abandoned land, transformed into an unrecognisable entity that must be understood anew, amid the intoxication of reunions and the bitter memory of the past.

A journey to the birthplace of a man whose identity is under construction, a physicist, poet and musician, who "makes trouble here and elsewhere":  Karim Loualiche makes his way, wearing his backpack and camera as his provisions for the trip, through the green mountains of Kabylia to the rocky deserts of Tamanrasset and the red city of Timimoun, not forgetting Algiers and Constantine... with this question addressed to his fellow men: where is it better to live? In a country that is said to "have reached heaven", France, where Karim spent ten years in exile, or among his family in this Chantier A that is contemporary Algeria, slowly recovering from the bruises of a civil war whose marks are still visible, at least in the words of those who have experienced it in the flesh?  Between documentary and fiction, Tarek Sami and Lucie Dèche, with their travelling companion, weave a powerful posthumous evocation of the connection to the forsaken land, transformed into an unrecognisable entity that they must learn to read again, with drunkenness and sensual pleasures of reunions and the bitterness of (outdated) time passed, when the intimate clock begins to falter. 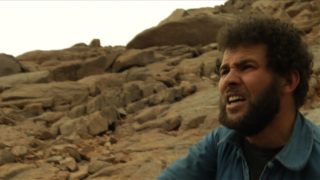