Wilfried, Salem, Ludo, Steven and Joris have psychological problems that led them to kill someone or set fire to a bicycle. They share the common fate of being locked up in Merkplas, a Belgian prison, with a release date of 31 December 9999. Using fixed shots and with rare precision, Ellen Vermeulen films this shameful incarceration that erases more than it cures human beings resigned to survive in an indefinite present, between four walls.

Merkplas is a prison: elongated buildings, massive forms seemingly weighed down by the sky, which is “so low” in this flat country. Merkplas is also nicknamed the “septic tank”: it is an indelible stain on the legal landscape of Belgium, whose prisons hold over a thousand mentally ill people who do not belong in this kind of place – even if they have committed “crimes”: killing a man, of course, but setting fire to a bicycle... With great restraint, Ellen Vermeulen films this absurd site, shared by Wilfried, Salem, Ludo, Steven and Joris. The only thing they have in common is their enigmatic release date, situated beyond the time of man: 31 December 9999. How can you heal in this space of banishment, where staff endeavour to humanise a condition that is not human, emphasised by the reflection of the bars on the windows in the guards’ spyhole? They all know they are lost, like Wilfried: sporting a feather necklace on his torso, which already looks a hundred years old, because imprisonment makes you very old, very slowly, he talks to the camera which doesn’t blink and finds the right distance to welcome his words and his modesty, before it is once again suffocated behind the cell door. 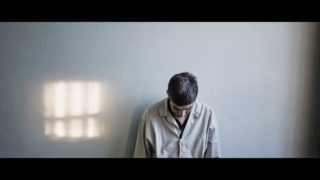