Mouâd is a 12-year-old boy living in a village in Morocco's Middle Atlas mountains, where there is very little to do in summer. If you want to have fun, you have to invent everything. Elise Fay and Bertrand Romefort were passing through the area with a camera; they went along with the game and gladly joined the children in the realm of their imagination.

In his sun-drenched village in Morocco's Middle Atlas, Mouâd is bored. He wanders the little streets and surroundings, alone or with friends, in search of play areas that would allow him to overcome the lethargy of summer. There is nothing else to do. If you want to have fun, you have to invent everything, especially when the camera of Elise Fay and Bertrand Romefort, who were passing through the area, starts rolling and following his whims. Mouâd quickly understands that this tool “makes him bigger” in the cinematic sense of the term, and he plays up his jokingly staged scenes (for example, a false call to prayer using a tripod as the microphone) so as to appear interesting. The filmmakers’ kindly vision falls into step with the energy expended by the adolescent as he makes a film in which he takes the starring role. The unpretentious Viens! invites us to be swept away by the fantasies of a character whose life, lacking any surprises, verging on the immutable, is suddenly stimulated by the presence of an intruder that he is instinctively able to bring into the realm of childhood imagination. 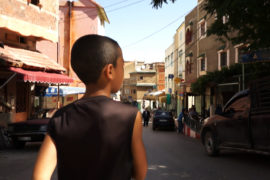