To a minimalist symphony composed of the sounds of the wind and blows of metal upon stone, a man tackles a rock formation with a sledgehammer. Victor Moreno records this silent Sisyphean labour through tight and wide shots in keeping with the surroundings. A musing on this old-fashioned action in the era of modern technology and its unbearable lightness of being.

Appearing out of nowhere, a man stops in the middle of a semi-desert landscape. Stepping out of his vehicle, he begins to tackle a rock formation with a sledgehammer, to a minimalist symphony composed of the sounds of the wind and the blows of metal on stone. Victor Moreno records this old-fashioned action through tight, wide shots in keeping with the surroundings. It is impossible not to think of the myth of Sisyphus when contemplating La Piedra, this ‘mise-en-scène’ of a man – about whose real aims we know nothing – using physical strength alone to strike a piece of centuries-old rock from the earth. Without giving away what we might call the “twists” of the film, the way in which the work is shown in sequenced long takes helps to make it resonate through the very bodies of the audience, as if we ourselves were the stone that the sledgehammer is obstinately pounding until it abruptly stops. As if we were the final recipients of this prehistoric labour, which takes on a sense of the absurd in this age of modern technology with its unbearable lightness of being. 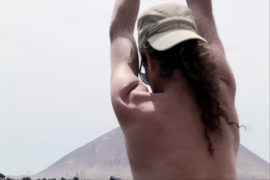