The director Jean-Gabriel Périot, who won Best Short Film at Visions du Réel 2012, asked ten inmates of Orléans Prison to write down and interpret their dreams and nightmares. Between the dark of the nights spent locked up and the light of a future beyond the walls, this is a series of hard-hitting portraits delivered in the spoken word and songs.

The film is composed of eight long shots in which neither the camera nor the subjects being filmed move. 1:33 format, classic 4/3, where the character is centrally framed, almost locked in. We listen to dreams. Little by little, the details (words and spaces) give away their special features. Locked inside the walls of a prison, the dreams are those of the inmates, who share them with the spectator, staring straight into the camera. “Engaging with the inmates’ dreams allows us to create a portrait of life in prison in negative format. The madness of the dreams correlates to the repetitive nature of the days; the freedom of the dreams correlates to imprisonment” (JGP). Each shot has its own rhythm, its own music, according to the alchemy that adapts to the nature of everyone’s dreams. Hallucinations are widespread, confusing dreams while asleep with those while awake, just like rap with electronica. The dream of one finishes, at times, in that of another. Produced as part of a workshop led by Jean-Gabriel Périot and the musician Gérald Kurdian at Orléans Prison, Le jour a vaincu la nuit is “a film about the only space left free to the inmates of a prison: their imagination.” (JGP) Paolo Moretti 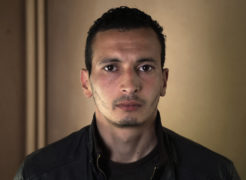