Haitian voodoo priest Amon was invited to Poland by theatre director Jerzy Grotowski in 1980. The experience of this new country and the memory of his ancestors, Polish deserters from Napoleon’s army who helped liberate Haiti from slavery, inspired sentiments of recognition in Amon. He felt compelled to help the Polish. The fall of a regime, narrated through a visionary account and images from the archives.

In 1980, following a visit to Haiti during which he witnessed a possession ritual, the Polish theatre director Jerzy Grotowski invited Amon, a voodoo priest, to return with him to Europe to participate in a theatrical laboratory. The winds of freedom were blowing strong in Poland, but the repression of the regime was drawing close. Amon experienced this new country, its inhabitants, habits and customs. He saw the humiliation of a people submissive before power. This is when the memory of his ancestors, Polish deserters from Napoleon’s army who helped liberate Haiti from slavery, inspired sentiments of recognition. He felt compelled to help the Polish... at all costs. Based on a real incident and on strictly documentary images, the film adopts a fictional device. After a prologue attesting to the existence of the mysterious Amon, the film plunges into a semi-hallucinatory account following the motif behind “Persian Letters”, where the priest comments directly on the archive images, with a final connection between the agony of Duvalier’s Haitian dictatorship and that of the communist regime. An exercise in exorcism stamped by a certain irony. 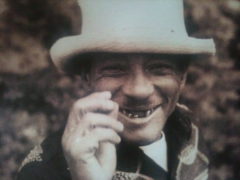