Yin-Yu Huang reminisces wistfully on the homosexual relationships he formed during his military service. Like pages torn from a diary, his cinematic voiceover monologue touches on themes of childhood and family, and is imbued with a soft and sunny melancholy inspired by the fictional universes of Wong Kar Wai and Apichatpong Weerasethakul.

Yin-Yu Huang is gay, yet beneath the apparent ordinariness of this situation lie many injuries, losses and hesitations. The filmmaker, who comes from an average Taiwanese family, constantly tries to understand in this cinematic monologue how it all began, by returning to his recent past in successive circles: the relationships he formed during his military service, the wedding of one of his sisters and, finally, the video archives of his childhood representing the starting material for Ye Wan De Wen Du (literally “the temperature at night”) are shown like pages torn from a diary. A diary peppered with a series of drawings that express a certain violence when the images and off-camera sounds are enshrouded in a soft and sunny melancholy inspired by the dramas directed by Wong Kar-wai and Apichatpong Weerasethakul. Like the child he reveals to us, both innocent and fragile when he shows himself in front of his father’s camera, Yin-Yu daydreams about what kind of man he would like to be within the extremely controlling society that has placed him among the invisible.
Emmanuel Chicon 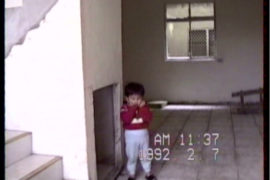