This self-narrated short film begins quite innocently with the filmmaker standing in front of a mountain of objects that have been piled up during his apartment move. Then the story drifts away into the night, where the ideology of the cult of the body takes a monstrous shape, making metallic rattling noises under the bed. Using stop motion and other artistic visual tricks, this humorous horror film explores the fear of being dominated by materialism.

At the periphery of the documentary film genre, curious objects can be found: Return of the Body Snatchers begins quite innocently as a self-narrated short film where Carlos Essmann is confronted with a mountain of objects: countless things that came into view in his last apartment move but he simply could not be separated from. However, the story told with stop motion and other homemade visual tricks soon drifts off into the abyss of the subconscious, into the night, where seemingly inanimate things spring to life and the ideology of the cult of the body takes a monstrous shape, makes metallic rattling noises under the bed. The terrified filmmaker reaches for his only weapon, the camera, to film himself and his encounter with the nocturnal visitor in his sleep. With the tension of a horror film and a touch of science fiction, this humorous UFO of a film deals with the widespread fear of compulsive hoarding and being dominated by materialism in general. Jenny Billeter 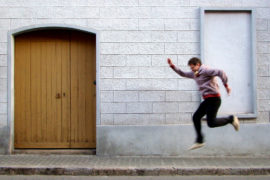