After attending the Ateliers Varan organised in Cairo in 2012, Noha Al Madaawy was able to make a film that is impossible to summarise. We encounter a bride dressed in white, a manicured father, a choreographed dance of mopeds set to the Rite of Spring, some sequences of old-school Egyptian cinema and the Muslim Brotherhood. The graceful editing creates an intimate and captivating evocation of the status of women.

Pendant la nuit is a rare gesture. Something very intimate is revealed to us from the opening scene. A manicure, the ‘mise-en-scène’ of a conversation between father and daughter, the former ordering the latter to give up her dreams for "reality", the one imposed by men, of course. Noha Al Madaawy weaves a subtle, surreal and captivating film from this unique confrontation, exalting the theme of freedom that the “revolution” brought with it, in order to simply affirm that this will continue only as long as the feminine side of the social fabric is not allowed to participate in the liberating process. The bride who walks along a main road blocked by traffic is meeting her destiny. Her head is inhabited by fragments of shadow play from the past – taken from old-school Egyptian cinema, while the bacchanal of scooters heralds the movement that is bringing an entire society towards... what? The vigour of Stravinsky smashes the silence of the fundamentalists who invaded Tahrir and are shot with a water pistol: a ridiculous, grating and “shameful” attack that undermines the patriarchy to its very foundations. 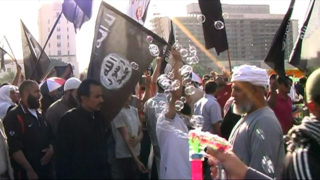