A village in Russia's south Ural Mountains has been exposed to radiation several times due to incidents at the "Mayak" nuclear plant. It is one of the most polluted places on earth by radioactive waste. The surreal beauty of this toxic landscape is the backdrop in which the inhabitants lead their lives. Metamorphosen is also a homage to the strength of these people and their daily struggles against an invisible enemy.

A village in Russia's south Ural Mountains has been exposed to radiation several times due to incidents at the "Mayak" nuclear plant, which used to produce fissile material for Soviet atomic weapons. It is one of the most polluted places by radioactive waste on earth, yet its inhabitants go about their lives. We meet them and listen to their accounts of commonplace horror, memories of accidents, concerns about the future, sensing at the same time the strength of their resilience, thanks to the respect and sensitivity of the director. The camera goes into houses, along streets, opening up landscapes: we perceive invisible toxicity everywhere. The surreally beautiful and dramatic black-and-white photography successfully rises to the challenge of making the invisible visible. The very matter of the image seems exposed to radiation. Bathed in such light, a normal act, like preparing a meal, is no longer quite normal. Rigorous framing, subtle sound work and an impeccable sense of editing contribute to an atmosphere that is very difficult to forget. 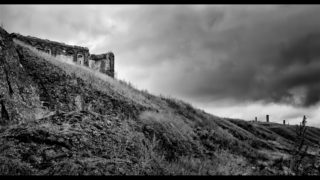