Mahragan is the name of a Chaabi group who are taking Egyptian music conventions by storm. With great panache, Omar El Shamy, a young director trained at the Ateliers Varan in Cairo, captures moments in the lives of these very young musicians and their incredible energy. With their rebellious slams that mock every form of authority, they have become part of the Egyptian “revolution”.

From the opening sequence, we are immersed in a genuine maelstrom of sound and image, a grungy mix of infrabass, powerful rhythm sections and a snarling voice that galvanises the young (and male) crowd that has come to sway along in this Cairo street where Mahragan is playing. A Chaabi group who are taking Egyptian music by storm, they revisit the songs of the Sufi poet Naqshbandi and those of Badei Kheiry, a contemporary of the 1919 Egyptian Revolution, between two verses that are evocative of Egyptian life here and now. This is the heart of the rebellious slams by this young trio who, not so long ago, were singing “young people are written off”. With great panache, Omar El Shamy captures moments in the lives of these very young musicians pulling themselves up from the depths of Egyptian society with incredible energy. Mahragan are admittedly more often found providing entertainment at sometimes chic weddings (one scene shows this openly) than giving frenzied concerts in the streets of the Egyptian capital. Yet they have become part of the ongoing “revolution”, unwavering in their certainty that the power of the elders is shaky and that they will gleefully deliver the final blow. 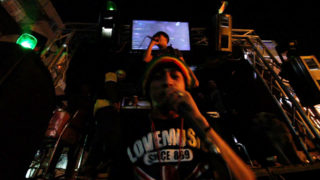