The director is living happily in Germany until his father asks him to return to Ecuador. His restaurant and grill is close to bankruptcy. Aguirre, who has meanwhile become a vegetarian, gets involved with the ailing family business. Personal, humorous and commented on with Aguirre’s own songs, the film explores themes of responsibility and independence – and the fact that everyone remains the child of his parents.

Filmmaker Dario Aguirre had been living in Germany for several years when his father unexpectedly asks him to return to Ecuador. His grill restaurant is close to bankruptcy. Having since become a vegetarian who prefers doing yoga to watching football, Dario realises that despite the great distance, he remains the hope of his parents. He travels back and confronts the complicated relationship with his father. Meanwhile, his mother has already gone away and only reports from afar. Told in a personal and funny way with a nice touch of self-mockery, Cesars Grill deals with bizarre strategy meetings and the business-harming small pleasures of his father well liked by everyone. Yet as illustrated by Dario's songs, which he often performs on his guitar in the middle of the action, it is also a film about growing up and dealing with expectations and disappointments. Step by step, accelerated by a stroke of fate, father and son grow closer to each other and tackle the family business together. 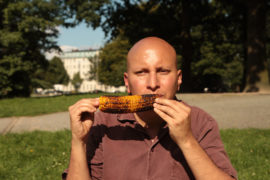