Julian lives in a small town in northern Florida. After writing a poem, he goes by bus to Ground Zero to commemorate the September 11 attacks together with his fellow citizens. Thomas Haley films this ordinary patriot who seeks to anchor his identity onto a national project in crisis and provides a subtle portrayal of a “poor white boy” who has not given up on the American dream.

In the family home, baby-faced Julian sometimes dreams of thrusting a butter knife into Bin Laden’s throat. In a ritual that has become his reason for living, he travels from his native Florida to the Ground Zero memorial every year. He has even composed an epic poem to the glory of the American nation and its flag, which he appears to suckle like a mother’s breast or brandish like a sword: the same sword that will soon rise into the skies of New York when a proud 40-storey building is completed. Raised in Oregon, Thomas Haley is familiar with the American heartland and films it sensitively. With these faces and bodies, often shown in close-up, the filmmaker successfully conveys the identity crisis currently gripping America. While the scripted show of public and multiracial recollection that opens American Dreamer portrays the end of innocence, the moving yet monstrous character of Julian embodies one of the powerful foundations of ordinary patriotism, the stubborn and naïve belief of a “poor white boy” who has not given up on the American dream. Emmanuel Chicon 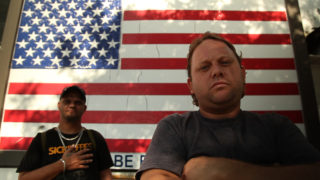