In the Sicilian village of Siculiana, a crucifix representing a black Jesus has been venerated for centuries. The statue attracts the attention of several people hailing from Western Africa. In this village run through by racism and prejudices, the film sketches out an attempt at dialogue during the annual procession.

In the Sicilian village of Siculiana, a crucifix representing a black-skinned Jesus has been venerated for centuries. Every year, on the occasion of a large procession organised in honour of the patron saint, many emigrants return to their native land to participate in the celebrations. In this village riddled with racism and prejudice, the statue of the black Jesus attracts the attention of Edward, Peter and Samuel, originally from Western Africa, living temporarily in the Villa Sikania shelter. In a gesture of fraternity, the three young men volunteer to carry the statue of the black Christ during the next procession. With kindness, Luca Lucchesi’s camera accompanies this attempt at dialogue which prompts many inhabitants of Siculiana to question their relationship with “the Other” but also with the history of the village as well as with one of its founding symbols. A Black Jesus echoes a singular story of universal dimensions. 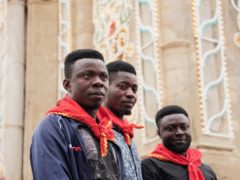 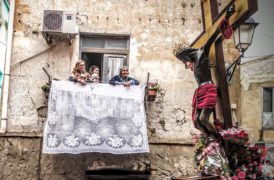