An inexplicable event has taken place: dozens of manta rays have washed up on Gaza City beach. Antar is thinking about the song he is planning to record, Noor is preparing his next news report, Moemen is photographing a demonstration, while teenagers in the Khan Younis camp are doing parkour. It’s an ordinary day in an extraordinary area.

What does an ordinary day in Gaza look like? Striplife starts nonetheless with an extraordinary event: dozens of manta rays have washed up on Gaza City beach. A miraculous catch that livens up the city where Antar is preparing to record a song, Noor is getting ready for his working day as a Watania TV reporter, teenagers in the Khan Younis camp are limbering up for their daily parkour... While Jabber, who lives in the “buffer zone” 400 metres from Israel, is tending his fields... But a few scattered gunshots resonate in the distance, with the slow dance of the Israeli armoured jeeps blocking the horizon. The skill of this collective of Italian filmmakers that made this immersive film, consists of distilling the signs of the blockade into images: Moemen, a professional photographer, getting around in a wheelchair after being mutilated during Operation “Cast Lead” in 2008, a fishing boat recently riddled with bullets... And a striking sequence showing a Gaza supermarket brimming with Israeli produce... and then suddenly plunged into darkness due to a power cut. It seems that no violence, even symbolic, will be spared for this people who are being kept on life support. 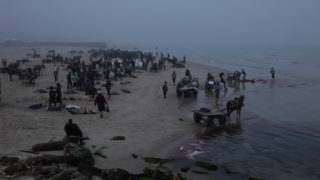