After selling cigarettes from the “grey” market online – and becoming considerably wealthy – the Messina brothers are being pursued by multinationals from the tobacco industry. Far from being intimidated by their threats, they are building a factory in Italy to produce their own brand. A “gangster” film whose reckless characters are not without humour.

After selling cigarettes online coming from the grey market – and becoming substantially wealthy – the Messina brothers are being pursued by the multinational tobacco industry, in particular by Philip Morris which is demanding the tidy sum of $550 million. Far from being intimidated by these threats, they decide to leave Russia, where their offices had been until then (their stocks being in a Swiss free trade zone), and construct a factory in Turin to start producing their own brand and sell it at lower prices. They will also be able to defuse the subject of the complaint. However, it is obviously a question of monopoly and not of justice in the real sense. Following the brothers in the heart of the battle, even though the state monopoly tries to shut down their factory with much police intervention and legal proceedings, this gangster movie paints an astonishing and suspenseful portrait of its protagonists, terribly reckless and not without humour, in this fight between big and small-time "villains". 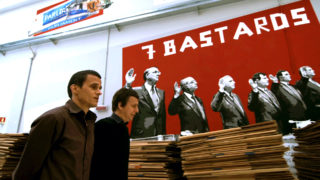