A band and their instruments, made of found objects, such as vintage toy jukeboxes, chimes, trinkets, and acoustic knickknacks. At their concerts, grown ups and children are awestruck alike. A film with a ‘mise-en-scène’ full of surprises, with fragments of pure attraction reminding of Méliès and early cinema, and with a sound that borders on primitive and psychedelic tones.

A man dressed in black connects his bike chain to the wheels of a movie projector, he gets on the bike, pedals, and starts the projection: this imagery conveys the idea of cinema as an artisanal and at the same time magical device. After this visual prologue we enter the world of a band, who build their instruments from objects scraped together here and there: vintage player pianos for children, chimes, trinkets, and acoustic knickknacks. At their concerts, grownups and children are awestruck: they are being thrown into a handcrafted world as it has never been invented before. Paweł Romańczuk, the leader of the group, does it not only out of passion. He explains that actually, in his case, “making music derives from the most primary needs”. In between the performances we discover homemade images, as well as delightful fragments that recall the early cinema of Méliès. A film with a mise-en-scene full of surprises and with brilliant psychedelic sound compositions. 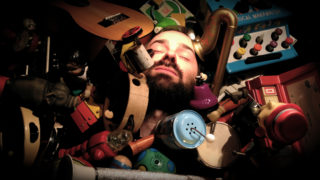