Mashti Esmaeil usually lives on his farm where he cultivates rice, three hours’ walk from the house of his wife and daughter. With an uplifting degree of independence despite his blindness, he also proves in this affectionate portrait to be a serene and wise man with an incredible sense of humour. A gracious tribute to a certain predisposition to happiness.

Mashti Esmaeil lives on his farm where he cultivates rice, a three-hour walk from the house of his wife and daughter or from the village shop. With an uplifting degree of independence given his blindness, he also turns out to be a wise and vigorous man with an extraordinary sense of humour. Sometimes, no doubt tired by his age, he falls asleep hoping that death will calmly come to take him away, only to wake a few hours later and chase wolves in the dead of night with his oil lamp. The camera is sensitive, and sometimes adventurous when the man climbs trees and it goes ahead of him; it knows how to recognise grace in the details he himself discerns, well beyond his blindness. One year goes by in the life of Mashti Esmaeil, lulled by the seasons, prayers and work in the fields, to the rhythm of jokes and the affection shared with his sidekick Nasir. A cheerful and charming tribute to a certain predisposition to happiness. 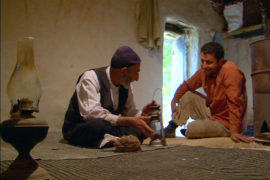