A Bulgarian computer engineer has moved to Finland where he is developing a scientific formula which will provide irresistible seductive power to those who apply it. Using his colleagues as guinea pigs, he explains his theories to them before sending them off to put them into practice. A documentary filled with humour about one of humanity’s key themes.

One of the keys to humour can be found in the distance between great ambition and the limitations of the human condition. This is the key that this film used to tell the story of a group of computer engineers rating themselves using a scientific system which aims to conquer male shyness and make the man who follows it a real success with women. The theme of seduction has always intrigued human beings. What is it that enables one person to begin easily a romantic relationship where another person fails? Is it a question of behaviour, chemistry (olfactory or visual) or pure and simple luck? Does a winning formula exist? The protagonist, who moved to Finland from Bulgaria with many hopes, a happy marriage and a slight physical defect, tries to answer these questions with the complicity of other computer experts. He uses them as guinea pigs, explaining his theories to them and sending them off to put them into practice. The serious theme combined with a “humorous” approach make this film a real documentary comedy. 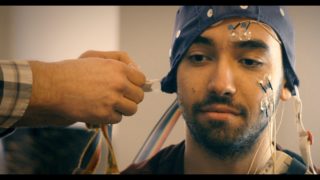