Two young Dutch border police recruits undergo an intensive three-week training course intended to prepare them for their future role: deporting rejected asylum seekers back to their country of origin. For the first time, Guido Hendrikx films, with sharp direct cinema from the viewpoint of his protagonists, the policing vanguard of European immigration policy.

“Are you ready? Let’s go then...” This polite invitation comes from a police officer whose job is to “escort” a rejected asylum-seeker back to their country of origin. This euphemistic approach aims to give a presentable face to a procedure of forcible expulsion of undesirable foreigners from the airports of fortress Europe. The protagonists are police officers from the Royal Netherlands Marshals, who, in 2012, were responsible for sending “home” some 1,500 Nigerians, Surinamese, Afghans, etc, aboard KLM flights. Guido Hendrikx succeeded in filming two young recruits to this border police force during their “theoretical” and practical training. This includes reflection on the “'humanity” of the profession, but it mainly involves wielding a sophisticated panoply of means of restraint. He then filmed their actual immersion in what will be their job. Filmed as direct cinema, Escort is built like an initiation story which, after the final test, will leave you devastated. Just like the two protagonists themselves who, between a car door slamming and a look lost in the distance,  upset by what they have come to observe as mere witnesses, seem to want to escape from their disturbing reality. Their armour splits as very human concerns are aroused. 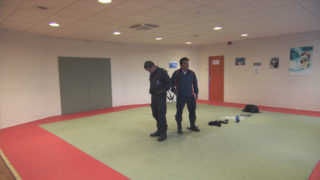 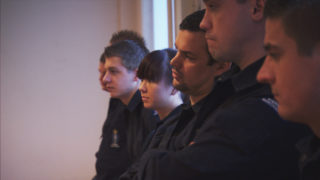