Arami Ullón must return to Paraguay to make an important decision: what will happen to her sick mother, Mirna? The heartfelt gaze of the camera reveals a relationship filled with love, but also unspoken and unresolved issues. A sensitive film which examines the inner turmoil of the daughter during the final stages of her mother’s degenerative illness.

Before it is too late, Armi Ullon must return to Paraguay to make an important decision: what will happen to her mother, Mirna? The caretaker is no longer able to handle the rapidly worsening medical condition of Armi’s mother who is afflicted with epilepsy and Parkinson’s disease. Armi, the daughter and director of the film, must find a solution for her mother’s future. With a sensitive approach, cameraman Ramon Gyger (winner of the Best feature film Award for Karma Shadub at the ‘Compétition Internationale’ VdR 2013) unveils a relationship filled with love, as well as unspoken and unresolved issues. Armi is apprehensive about abandoning her mother and leaving her in a nursing home, far away from Switzerland, the country where Armi dreams of raising her own family. The sense of guilt which torments the daughter shines through in the images; sometimes faintly and other times with full force. A thoughtful movie which examines the inner distress experienced by the daughter during the final steps of the mother’s degenerative illness. 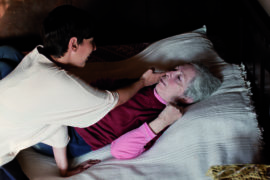