Scenes of daily life on the banks of the Danube in Serbia; little or nothing seems to happen for these men stranded at the port along with the boats. Guided by a protagonist who is at the same time endearing yet a little naive and quirky, the discussions touch on economics, moths, the old songs from their youth, in fashion in the 1970s. A sensitive observational film about a society put on hold.

Scenes of daily life on the banks of the Danube in Serbia; little or nothing happens for these men stranded in the port along with the boats on which they are still living. Guided by a protagonist who is endearing yet a little naive and quirky at the same time, the discussion touches on economics, moths, the old songs of their youth that were fashionable in the 1970s. A benevolent camera and great technical skill were needed to portray accurately the sweet nostalgia cradling the protagonists of 1973; Stefan Ivancic's camera is, as always, precise and gentle, composing rigorous frames in a series of static shots. An observational portrait that reveals a society seemingly adrift, or rather immobile, having been overtaken by the logic of the present. What remains are the boats that serve as a backdrop to life, and music: that of the good old days, of youth, of a different world. And the burning question: what exactly happened in 1973? 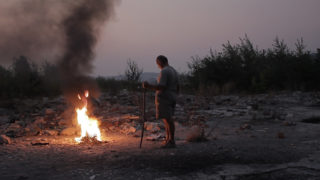