In the past decade, the Israeli military control over 3.75 million Palestinians has become an economic endeavour that is considered the key element to the Israeli wealth. The means used by the military against Gaza and in the West Bank are exported worldwide. The film shows how the military occupation is a national business enterprise so valuable that the State of Israel cannot afford to lose.

To whom do the Israelis owe their financial prosperity and the comfort of their lives? Rather than myths about the Jewish genius or the miracle of Israel's economy, HaMaabada offers a more disturbing truth. In the past decade, the Israeli military control over 3.75 million Palestinians has become an economic endeavour that is a key element to the Israeli wealth. Since 9/11, dozens of countries are applying military force against civilian resistance and are searching for well-tested methods in this new form of warfare. Therefore the means used in military incursions, assassinations from the air and 24-hour surveillance over the entire Palestinian population are aggressively exported worldwide: from Brazilian favelas to US ghettos and borders. Military commanders become successful contractors while Israel has graduated to the world’s fourth largest exporter of arms. Arms dealers, high generals and technicians show the trail that turned military occupation into a national business enterprise that is now bringing so much money to the state of Israel that it cannot afford to lose it. The war has to go on. 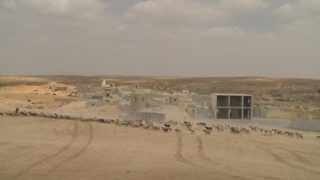