A troubling relationship arose between the character played by Winona Ryder in the film Girl, Interrupted, the genuine depression experienced by the actress, and the shoplifting of which she was accused. Consisting entirely of clips from existing films, this video essay, which ultimately turns out to be profoundly personal, explores the possible links between depression and kleptomania.

“Have you ever confused a dream with life? Or stolen something when you had the cash? Have you ever been blue? Or thought your train moving while sitting still?” These are the words, taken from the soundtrack of the film Girl, Interrupted and spoken by Winona Ryder (who played the lead role), that open this film, which consists of both real and fictitious scenes featuring Winona Ryder, as well as many clips mostly taken from 1950s educational films. This video essay uses the troubling relationship between the character played by Ryder (confined to a psychiatric hospital in the 1960s), the genuine depression experienced by the actress, and the shoplifting of which she was accused in 2002, in order to explore the possible links between depression and kleptomania. Beyond its sophisticated and deft structure and form lies a deeply personal and sensitive dimension, while the rest of the story is fleshed out by first-person accounts. Emilie Bujès 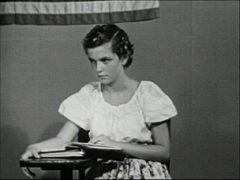