Journey through different strata of Hong Kong’s memory, this filmed essay explores a generation’s childhood recollections during the last decade of British rule. It uses images from the archives of the time – visits from the Queen, television programmes – mixed with others from the city today to delicately interweave a personal history with that of a region.

A journey through different strata of Hong Kong’s memory. This filmed essay is constructed in a double movement – towards the past for the narrator and towards the future for the character of the grandfather leaving his village in China during the Cultural Revolution at the beginning of the film –, and explores a generation’s childhood recollections during the last decade of British rule in the territory. The semi-autobiographical narrative elements associated with the semi-fictional character telling the story come together to form a unique history of life under British rule adjacent to Communist China. A diverse, multifaceted film, composed of images of the city today mixed with precious archive images depicting visits by the Queen – whose face appears on stamps and currency – or TV programmes teaching its audience English swear words or the “useful” notion of propaganda. A personal history and that of a region, neither of which are devoid of a certain resentment, are delicately interwoven in this enlightening and touching film, in a suspended atmosphere. 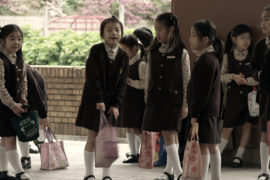