François and Jean enjoy scouring the wilderness in search of thrilling experiences. Jean-Claude Cottet followed them on a route  over craggy peaks to share in their addiction. His camera is like the two men’s rope and harness, the tool with which he creates a previously unseen, visceral thrill ride of a documentary that is both captivating and ambiguous.

François and Jean enjoy being in pre-civilisation scenery. Precipitous gorges are their favourite hunting ground; they make their way through among the rocks and undergrowth, insatiable thrill seekers carrying nothing but metres of ropes, carabiners, talc and their own willowy bodies. The ritual filmed by Jean-Claude Cottet appears immutable. The climbers warm up on some vertical surfaces, check and encourage each other and compete against each other as adrenaline and fear gradually increase in "on the edge" of the void. There are few words and, when it comes to reviewing a climb, they are strung together in technical mumbo-jumbo worthy of a secret society. The filmmaker followed the protagonists on a route through the craggy peaks of the Verdon Gorge, walking with them along the high wire of their strange relationship, which consists of playing with nature’s perils. With only his camera as rope and harness, Cottet creates a visceral thrill ride of a documentary, which is both captivating and ambiguous, with a pair of tightrope walkers who seem to enjoy the fall rather than the sense of domination that overcomes those who reach the summit. 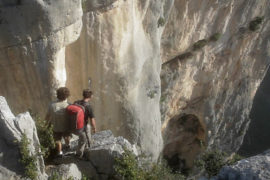