Sherman lives in a remote and unknown place. By day, he digs for clams; by night, he works alone in a factory that we find hard to imagine is ever empty. A moment, as commonplace as it is lyrical and mysterious, unfolds through a combination of the powerful image and sound, minimal use of narration and a personality with exceptional traits. War approaches; but some people have already lost.

Sherman lives in a remote and forgotten place. By day, he digs for clams; by night, he works alone in an industrial fishmonger’s, absorbed in an inner world, preparing the work tools for the 6 a.m. shift. Sherman's calmness and marginalisation, his sense of isolation, is then briefly contrasted with the violence generated by modern consumerism.A narrative of slow, minimalist takes, relying on observation and a personality with exceptional traits, builds through a combination of powerful and remarkable sound. At times reminiscent of a horror film, Night Labor unfolds in lyrical and pictorial mystery, full of contrasts. Familiar from their studies at the Film Study Center of Harvard University with work such as Leviathanby Véréna Paravel and Lucien Castaing-Taylor, the two directors became “interested in form and colour as ways to show stories. Language became obsolete and silence and environmental sounds became our palette. Sherman […] resembles the world he inhabits”. (AS/DR)Emilie Bujès 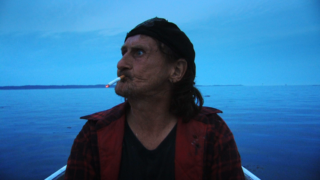 The Wind only knows Philipp Diettrich

My Kith and Kin Rodion Ismailov