After a long absence, Peter Liechti visits his now elderly parents, ready for a close encounter. The stories of their lives and rather difficult marriage are largely presented as a puppet theatre, with the parents, from the lower middle-class, portrayed as hares wearing shirts and aprons. Via the "Punch" character, the rebellious son channels the emotions that overwhelm him in this stunning portrait.

Filmmaker Peter Liechti (winner of the European Film Award for The Sound of Insects – Record of a Mummy, Visions du Réel 2009) feels ready, after a long absence, to get closer to his 80-year-old parents. Over one year, he films their daily routine in a middle-class apartment building. The once rebellious son questions them quietly but persistently, and shifts the dialogue into a finely crafted puppet theatre, with his parents as rabbits in a shirt and skirt. The attention to what the two parents say is sharpened and their stories are increasingly representative of a vanishing generation. Outdated morals and despair are awakened, not least regarding the troubled marriage, but their escape worlds are also opened up – the father's garden and the mother's love of Jesus. Liechti injects his own voice into this with carefully chosen musical pieces, sometimes drowning out his parents' voices. Sometimes violently strong emotions overwhelm him in creating this impressive portrait. The son however channels these emotions in the vicinity of his parents, by taking on the role of ‘Punch’ in the puppet show. 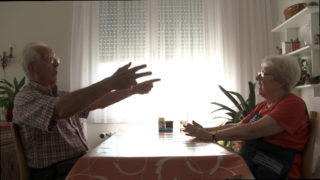