The Tunisian people took only four weeks to topple the hated regime of Ben Ali and, in doing so, paved the way for the “Arab Spring”, one of the major geopolitical upheavals of the early 21st century. After a thorough investigation, Christophe Cotteret tracks the beginnings of this event whose roots date back to the protests in the Tunisian mining region of Gafsa in 2008.

“Clear out!” This order, addressed to Zinedine Ben Ali in the streets of Tunisia, has been around the world. It could be said that this verb in the imperative, as blunt as the blow of a truncheon, summarises a process that Gilbert Naccache describes in Christophe Cotteret’s film: revolution against the “entire” political society. He thus suggests that the events of the Arab Spring are “exemplary” because they want to break away from an intolerable and iniquitous means of “governance” that extends well beyond the boundaries of the Middle East. With patience, by gathering diverse materials, archives filmed on mobile phones, interviews with various decisive figures of the Tunisian upheaval (cyber-activists, trade unionists, men, women, etc.), Démocratie année zéro gives genuine socio-historical depth to an event often reduced to the symbolism of Mohamed Bouazizi's self-immolation. From the first uprisings in the mining region of Redeyef in 2008 to the election of the Constituent Assembly in 2011, with a detour via the protests of educated youth in 2010, we see a country embarking on an uncertain yet irreversible path. 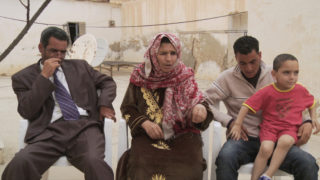