An exploration of the harsh debt system in Austria. Invariably remaining on the side of the institutions – benevolent or not – Eva Eckert uses a clear and calm aesthetic and structure to cast light on appalling and painful situations. A film that illustrates the hypocrisy of these institutions that profit directly from people who are in debt, ill-informed and under constant pressure.

Exploring the cynical debt system in Austria, this film examines various professions related to this field: courts or collection agencies, advisers and shelters for people who have been evicted... Only the banks, which (logically?) refused to participate, are missing. Illustrating the hypocrisy of a system based on consumerism and institutions that profit from people who are in debt, poorly informed and at a dead end, Schulden G.m.b.H. unequivocallydescribes, even in its title, what this is all about: debt and the business that depends on it. Remaining invariably on the side of the institutions, Eva Eckert uses a clear and calm aesthetic and structure to cast light on for the most part appalling and painful situations. Besides the nauseating aspects that it describes – such as the idea that at a certain stage of the process, the repayment is no longer desired since it is less profitable, or that a pedigree pet can be pawned if the debt exceeds a certain amount, this film depicts a modern society that seems to have lost the plot. 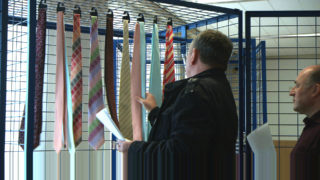