In a lost village in the Peruvian Andes a young girl is waiting for the new books to arrive. They are carried in a rucksack by a librarian, walking in the mountains, between the sky and the clouds. Rural libraries in Peru are made up of a few dozen books that, once read, are exchanged for others between communities. Books walk as people walk.

According to the rural cosmogony of the Andean region of Cajamarca, the Gods assembled the clouds in order to give the earth some consistency, an earth that the descendants of the Incas massacred by a handful of Spaniards brought over by Pizarro, are breaking their backs to develop and respect. The story goes that it was a book that precipitated the fall of the Atahualpa empire of the Incas. This is symbolic in the creation of rural libraries in the Altiplano, thanks to people like Alfredo, who gathers stories of their origins from village elders, whom he supports in their struggle to preserve an ecosystem threatened by multinationals and their mining activities. Pier Paolo Giarolo takes an ethnographic and poetry-tinged look at these country people living almost among the clouds, far from urban “civilisation”. Resorting to ‘mise-en-scène’ and direct cinema, Des livres et des nuages works like a fable carried along by the energy of its characters, in particular little Sonia, who whispers hesitant words into the immense sky, her access to knowledge and dreams. 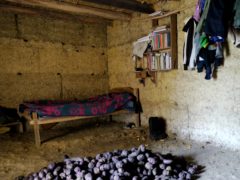