More than fifty years after the end of the war of independence, a French filmmaker and an Algerian photographer take us back to the middle of the Sahara in 1962. From an irradiated desert zone to the suburbs of Algiers, they follow the path of the fallout of a nuclear explosion whose dramatic remnants challenge the responsibility of nations. A film of great formal rigour about a shocking and unexplored subject.

More than fifty years after the end of the war, a French filmmaker and an Algerian photographer are criss-crossing the Sahara. They are looking for traces. It is not, however, Neolithic archaeology that interests them. It is instead that of the present day, which is less famous and enigmatic than rock carvings. With their images, some silent, some rich with the words of witnesses, they denounce a crime against humanity: the explosion of an atomic bomb, buried in a mountain not far from the villages and nomad camps, planned by the new nuclear superpower, France, in 1962. Thirty years later, prisons constructed by Algeria in the same area, heavily contaminated by radiation, will welcome political prisoners from the FIS (Islamic Salvation Front). With implacable rhythm, the filmmaker and the photographer alternate shots whose beauty competes with the enormity of the human tragedy. The words of the men and women who directly experienced the event announce the apocalypse. Like the stamp of a guilty verdict, the archive images form an indelible sign of the responsibility of nations. 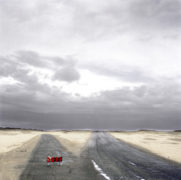