Like many people his age, thirteen-year old Gabriele dreams of motorbikes. But this passion for speed finds itself thwarted by his switch into another time. The grazing period is beginning and the hatchling (whose physiognomy he has) is spending his first summer in the mountain pastures where he must learn to be a shepherd. But this year, the harshness of both the task and the weather has forced the older shepherds back down into the valley. Up there remain only Claudio, who is a little older, and Gabriele, whom the “elders” welcome like the final heir of a dying profession. By combining rigorous framing with narrative flow, The Pass recounts the first steps and gestures of a youngster following the path towards adulthood. Mattia Colombo, Francesco Ferri and Alessandra Locatelli film the protagonists of this documentary initiatory novel as closely as possible, sober- ly capture their minuscule magnitude, their looks and half-words, the silence of work, between ‘huis clos’ and alpine landscapes. This “passage” is no other than a story of men who are passing on evidence for the world to come.
Emmanuel Chicon 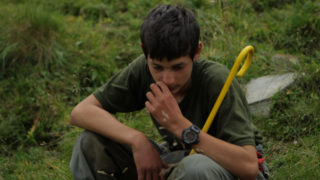 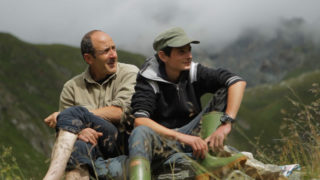