Mr Nishida is an entomologist. He has a close bond to the natural environment. On a scientific expedition to the island of Yakushima, an island of mountains shrouded in a seemingly eternal mist, he serves as our ferryman for discovering the spiritual beliefs that accompany the relationship that the island’s inhabitants have with nature. As the surveyors of these mountains covered in luxurious forest, they let us meet the divinities, mischievous spirits and moving landscapes with which they coexist, by visiting a Taoist temple and its Zen garden or an altar in its moss-lined setting in the undergrowth. In the calm of the forest, among the century-old cedars, the ideas of philosopher and geographer Augustin Berque illuminate our reflections on the close connections between nature and culture, the relationship of a society to its environment.
Here, man’s silence reveals the sounds of nature. We even hear the glide of a snail, the rustling of ants’ antennae before they gradually invade the soundscape, while the wind intensifies as the typhoon approaches.
Madeline Robert 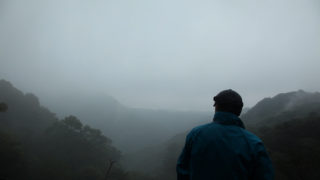 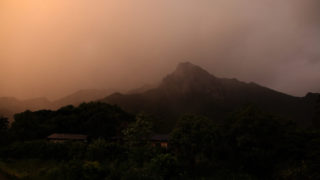