Adulthood and childhood, fathers and sons: after seeing The Kid with a Bike an 11-year old child from a foster family sends his thoughts about those topics to Luc Dardenne. A long distance debate starts. The poetry of pedagogy and the pedagogy of poetry come into play. The result is a surprising film which reveals cinema as an instrument of freedom.

“Bradley lives with a foster family. At a camp where he was spending his holidays and I was running film workshops, he watched Le gamin au vélo by the Dardenne brothers. The character of Cyril appeared on screen; like Bradley, he lives with a foster family. Bradley left the room overwhelmed. He came to see me and talked about the film. I recorded his words and his emotion with my camera and promised him I’d show these images to Luc Dardenne. I took the train to Brussels. In his office, the filmmaker watched these Bradley’s footage. An exchange then began between the child and Luc Dardenne.” (Alice Fargier) In a heated debate following a viewing of a film, a child and a famous filmmaker reflect upon the themes of adulthood and childhood, fathers and sons. Their dialogue directly addresses the act of creation. In their words, both the poetry of pedagogy and the pedagogy of poetry are deployed. The result is a surprising film in which the discovery of cinema becomes an instrument of freedom. 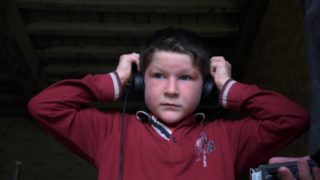