A circus unlike any other has been criss-crossing Chile for 40 years. This merry caravan, with its company of transvestites and gleefully subversive shows, attracts working-class, family audiences. El Gran Circo Pobre is also the refuge for an entire community, united around René, its ageing boss. Yet this utopian adventure is approaching its end… A portrait filled with humour and melancholy.

His face serious, an old clown in costume waits in his caravan before entering the ring. Off screen, the show has begun… René – alias Timoteo – has been running this circus unlike any other for over 40 years. With its company of transvestites and gleefully subversive shows, it criss-crosses Chile attracting working-class, family audiences. El Gran Circo Pobre is also the refuge – and utopia – for a small community of homosexual entertainers, blithely toying with gender and accepting their differences with a huge dose of self-irony. Yet despite the passion and the prayers, it is almost time for René to retire. As considerate with the details as it is with its framing, this elegant observational film reflects the torment of a man haunted by the idea of the end. Through fine editing, it depicts in one sweep the life of the boss and his caravan, in constant contrast. This portrait, filled with humour and melancholy, alternates between highlights and idle time, limelight and backstage, glamour and everyday hassles, exuberance and banality. 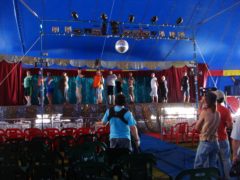