"Of what I once was, there now remains but a memory" – this line from a poem refers to the Cuban currency, thus establishing the melancholy tone of the film. With keen cinematic vision, the director follows four different people and their survival strategies in Cuba. In beautifully framed images, we take a walk through the ruins of a utopia.

In a time of new revolutions across the world, Cuba seems like a veteran. "What I once was is now just a memory" – this line from a poem sets the melancholy mood of the film that leads us on a walk through the ruins of a utopia. With an attentive gaze, Charlie Petermann follows four Cubans from different generations and studies their survival strategies. In beautifully framed images, he captures the boy selling sweets, then some men cultivating the land, and city dwellers forced into the perpetual trading that has long since become their lifestyle. In a recurring musical sequence, an old man goes through the streets of Havana to electric guitar sounds, trying to barter a fish on a hook in exchange for painkillers. The aesthetic standard of Cantos goes hand in hand with the respectful closeness to its protagonists. Their bodies and minds remain in motion. They stay open to the prospect of change; through the Internet, the young dissident is already communicating with the world. 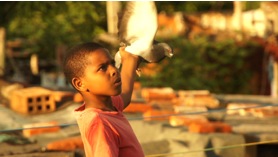