“Rolex the Portuguese” has risked the “adventure” in neighbouring Burkina Faso, without success. Here he is back in Abidjan, to make lots of money. With his companions, aged between 15 and 25, he makes a living from casual trade, in particular from that of  “grazing”, i.e. online scams, taking advantage of the monetary largesse of white women in search of love or sensations, whose money they then blow in the ‘maquis’ (bars) or nightclubs. This unvarnished immersion in cinéma direct does not describe “a profession” as Rolex tells the filmmaker, Joël Akafou, but rather a “phenomenon”, inspired by Doug Saka (who died in 2006). He was a musician with a meteoric career who promoted a hedonistic and casual model, and invented the “coupé-décalé” style of dance music, who became famous all over Western Africa and even in Europe. The protagonists of Vivre riche belong to a changing youth, disoriented by years of civil war, who, to the great displeasure of the previous generation (that it continues nonetheless to fear and respect), essentially intend “to cash in the colonial debt”. 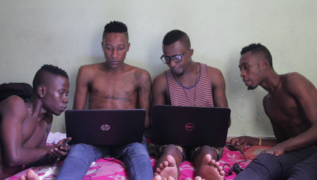 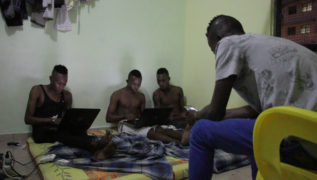