The art of music played with tree leaves. This curious film takes us into a world of eccentric characters: Vera, a former private detective, Pera, an expert farmer, and Josip, an inventor of instruments attempting to uncover the mystery of leaves. Frozen in time, filled with gentleness and poetry, music is still at the heart of life yet seems destined to disappear.

“Music has rarely been so offbeat” (MK), or the art of playing music with tree leaves. We encounter Vera, a former private detective who married at a tender age, Pera, an expert farmer, and Josip, an inventor of instruments attempting to uncover the mystery of the perfect leaf. These eccentric and charming characters draw us into the creative extravagance of Serbia, into an unimaginable traditional music universe, which sadly seems destined to slowly disappear. The film opens with Vera wandering around what appears to be a place dedicated to music, where each studio contains a different style; the inscription on the door reads “Death to capitalism, liberty to the people”. An observational vision that participates and exchanges through moments of wonderful complicity between the film crew – the sound engineer, in particular – and the protagonists. A gratifying film, full of poetry and grace, which takes place as if frozen in time, or rather out of time, outside the world, in the shade of the escapist power of music. 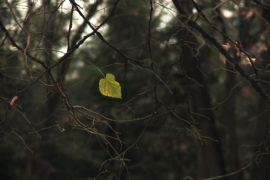