Captain Jack and his pirates live on a desolate beach on the shores of the Black Sea. A legendary seafarer is said to have buried his treasure there. Fuelled by gold fever, these dropouts blow lumps of rock into the air. But now, a luxury resort threatens to force out the pirates. An enjoyable film about the search for happiness, with bizarre characters and donkeys disguised as Mercedes.

The charismatic Captain Jack and his pirates live on a wild beach on the Black Sea. A legendary Ottoman seafarer is said to have buried his treasure there. In the grip of gold fever, theses dropouts blow lumps of rock into the air and dream about what they would do with all the gold. The women have long since ceased to believe in the promised white wedding dresses, and now the protected plot of land is to become a luxury resort and the pirates will be forced out. With affectionate humour, Bulgarian filmmaker Svetoslav Stoyanov reveals a world it is scarcely possible to believe still exists. This impression is reinforced by the beautiful dream sequences. True to typical Balkan style, filled with bizarre characters, much testosterone and petrol – when the latter runs out, the donkey is dressed up as a Mercedes – with strong emotions, loud voices and wild boars caught by hand, Poslednite chernomorski pirati is an enjoyable film about the difficult search for happiness and the frenzy that comes from hoping for it. 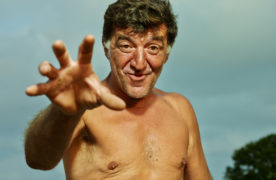